Your logo is your brand’s visual identity, and it should symbolise the values you stand for while also being instantly recognisable.

Designing your company logo requires creativity and when you’re operating in a crowded and unimaginative market it can pay to go against the grain. 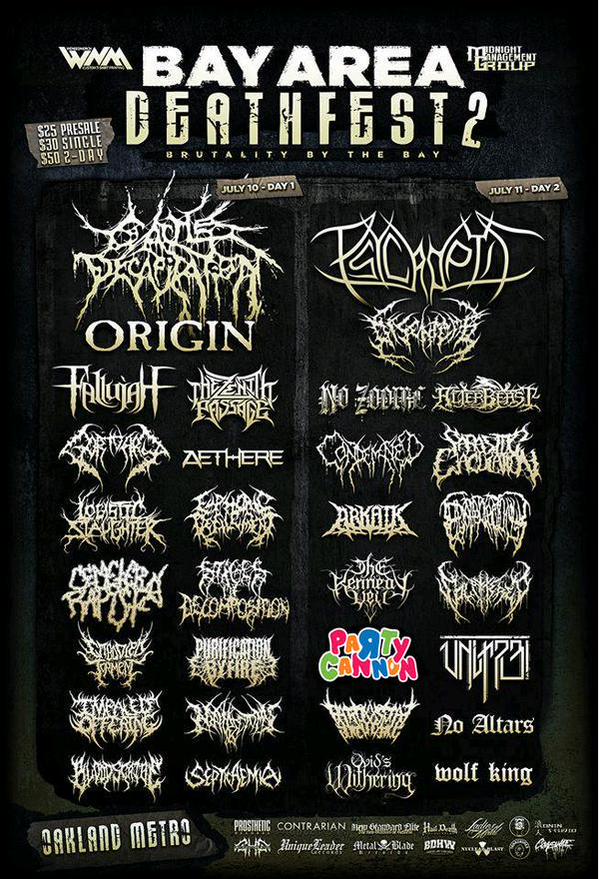 It may seem like an odd place to get inspiration, but death metal band Party Cannon can teach a lot of companies about effective logo design.

Who are Party Cannon?

Party Cannon is a brutal death metal band from Dunfermline, Scotland. Currently signed with Gore House Productions, their releases include 2015’s Bong Hit Hospitalisation and the 2013 live album Drunk in Cambridge. They describe their musical style as ‘party slam’.

Why are they getting a shout-out on a content marketing blog that doesn’t typically cover the extreme metal world? Because their ridiculously inappropriate logo is a work of marketing genius.

The above poster for a metal festival in Oakland, California drew a lot of online attention in 2015, however bass player Chris “Prey” Ryan said it wasn’t the first time.

“Every time it goes viral we definitely gain legitimate fans that listen to the music, attend shows, buy merch, and properly get what we’re about, which is awesome,” Chris told BuzzFeed News.

“I’m pretty sure 90% of the people that follow those pages have never even heard of Devourment, but now they’ve heard of us, which I can’t really complain about.”

One of the purposes of a logo is to make your company easy to identify, meaning it should set you apart from your competitors.

It’s true that there are certain colour combinations, typefaces and imagery that suit certain industries. If a distinct visual language exists in your field, you can use these familiar associations in your logo to give people some idea about your business even before they know anything about you.

But sticking too close to convention could see you become just another face in the crowd, a problem that can affect everyone from death metal bands to private spaceflight companies.

Graphic designer Andrew Sloan told The Verge that companies in this exciting new industry tend to be disappointingly unimaginative when it comes to their logo ideas.

“There are usually dominant blues, dominant blacks, all going with this rocket swoosh and a pointed star,” Andrew explained.

“At least from a differentiation standpoint, these new companies have such a beautiful opportunity to stand up and try new design conventions that are a little more friendly; something that suits your core values a little bit more than defaulting to a swoosh.

“As the commercial space sector starts to mature, the need to stand out is going to become more important.”

You don’t always need to pull out the Party Cannon to get your brand noticed, but it’s worth pointing out that some of the world’s most recognisable logos were conceived outside the box.

Take Apple’s iconic logo. It doesn’t feature a computer or anything directly related to the products they sell. If Apple was less of a household name, you’d be forgiven for thinking, like Forrest Gump, it was “some kind of fruit company.”

There are various theories about what the logo represents, from a pun on the word ‘byte’ to the biblical interpretation of eating fruit from the tree of knowledge. Its designer, Rob Janoff, has confirmed that none of these associations were consciously intended, and that the bite was included simply so people wouldn’t mistake the apple for a cherry. But what’s not disputed is that Apple took a familiar image with rich and ancient associations and made it their own.

Whether you can do the same depends on how successful your company is, but a good logo is a great start.

See more examples of great and terrible design when it comes to designing your business website.